A Halloween costume for dogs adds the family pet to the party fun.  Halloween is a spooktacular holiday where everyone can pretend to be a magical character for a day.  Why not let your dog be part of the fun?  Dog Halloween costume ideas include cartoon characters, Star Wars characters, and other classic Halloween characters as well.  Dress your pet up in a costume that suits their personality, compliments the owner, or fits into a group theme.  Let us show you everything you need to know to include your pet in your Halloween festivities.


The selection of animal Halloween costumes gets bigger and better each year, so find the costume that is comfy for the pet and easy to put on and take off.  Dogs that are used to wearing dog clothes are often more comfortable with Halloween disguises. 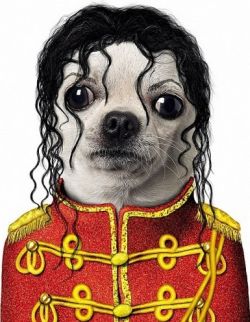 Halloween costume for dogs!
It's a dogs life, we're just here for the treats.

Safety and Comfort First!
Keep your haunting happy by keeping your pet safe. While social dogs enjoy being the center of attention, it is equally important to supervise your pet while in costume. Inspect your dog's costume for loose buttons or ribbons that could be chewed off and ingested. A Halloween costume for dogs that impairs vision is also a bad idea. 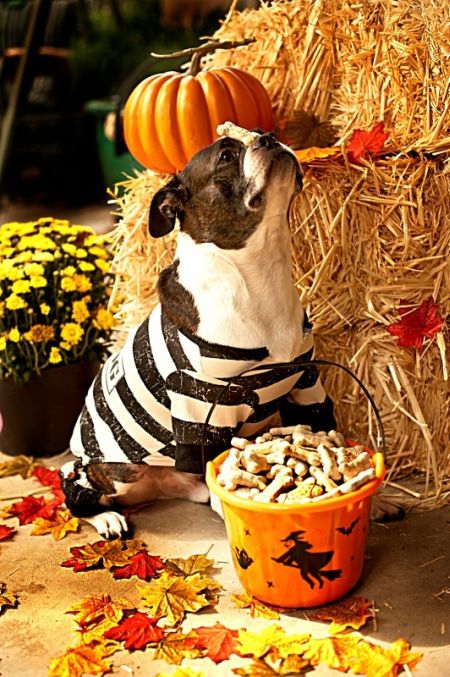 Monsters At The Door!
Start the Halloween party off right with a surprise and a disguise. Greeting guests at the door with your costumed pet will have your guests howling for more. A Halloween costume for dogs allows you to show off your Halloween spirit with a bewitching welcome to be remembered. 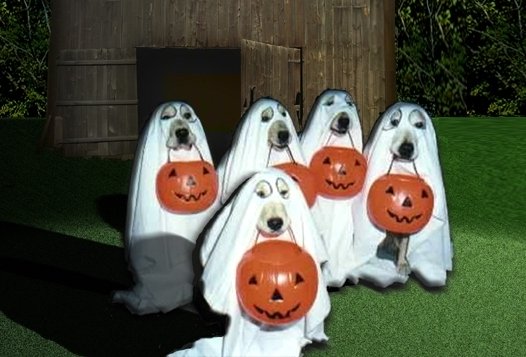 Choosing between good and evil!
Dogs are like people, some days are better than others.  Whether your pet is a little mischievous or a perfect angel, let the costume speak for its self. 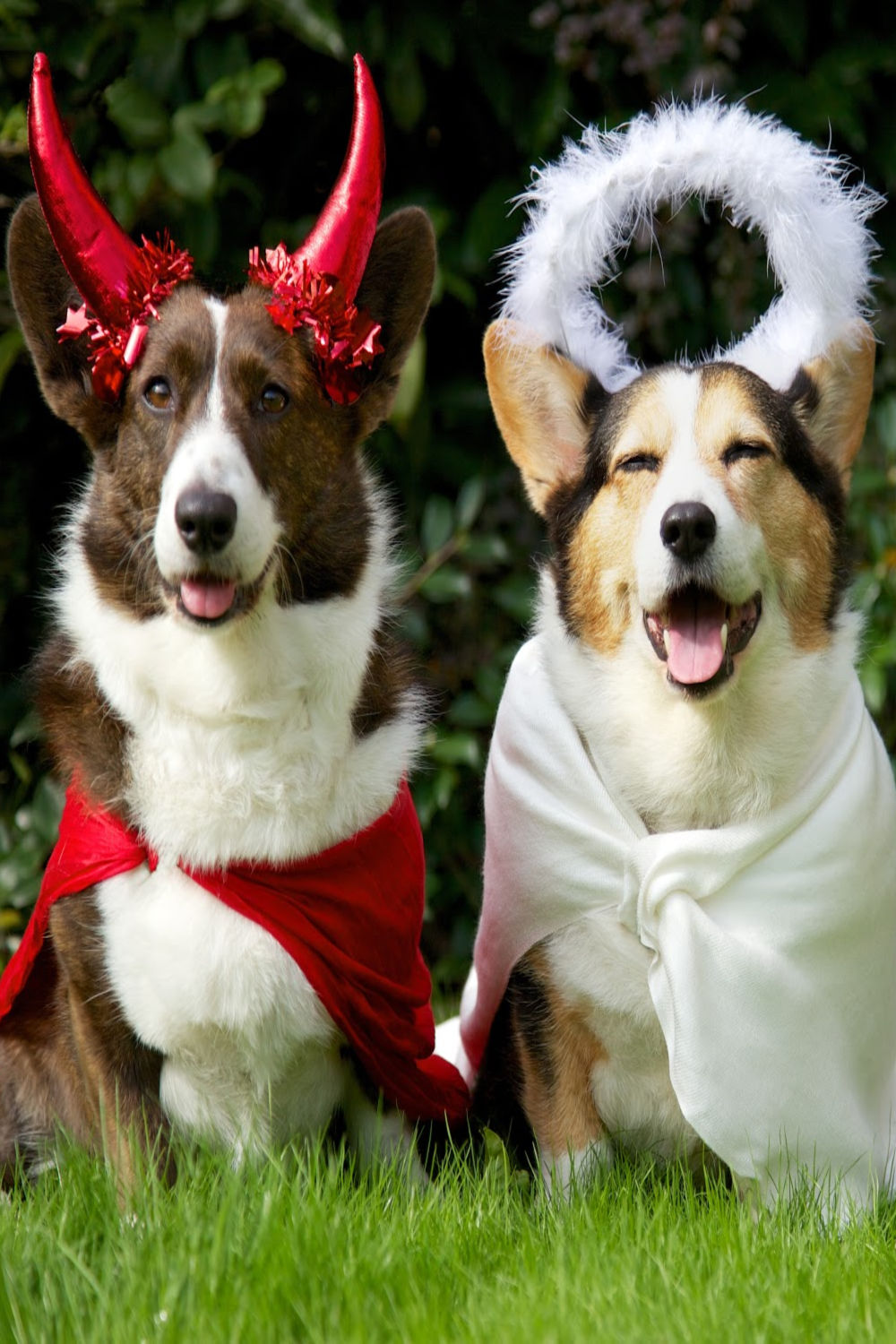 Halloween is going to the dogs. . .

Your dog is not just man's best friend.  He is also your hero.  Turn him into the Caped Crusader this Halloween and make him feel like one. If you have more than one dog, dress one as the Joker and one as the Dark Knight to bring the Batman legend to life.  Batman Halloween costumes for dog will make your pooch King of Gotham City.

Warning:  Your pet may think he can fly! 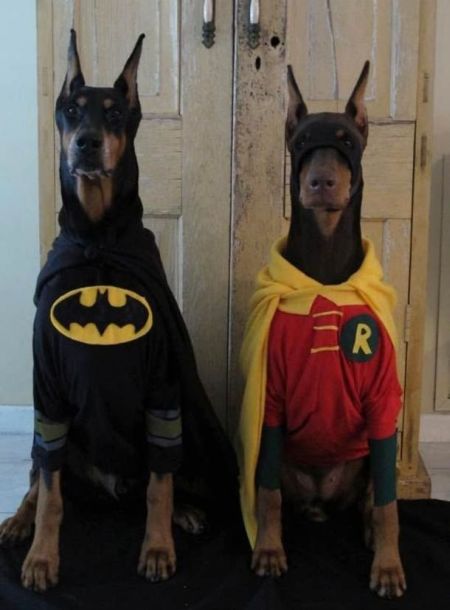 There are costume choices that will allow you to outfit your pet as a member of the Rebel Alliance or the Dark Side.  Popular Halloween costumes for dog include Darth Vader, Yoda, or Princess Leia.  Star Wars pet costumes allow you to bring the galaxy far, far away right to your own neighborhood.

Let the force be with your pet! 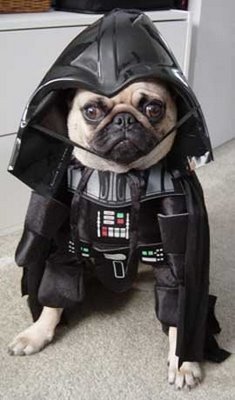 Give your dog the opportunity to become a famous cartoon dog such as the Flintstone's Dino, Scooby-Doo, Underdog, or the Jetson's Astro.  If this seems dog-gone ridiculous to your pet consider Superman, Wonder Woman, Diego, Dora The Explorer, or other TV cartoon idols.  You won't be barking up the wrong tree with these Halloween costumes for dog.

How 'bout them dog costumes! 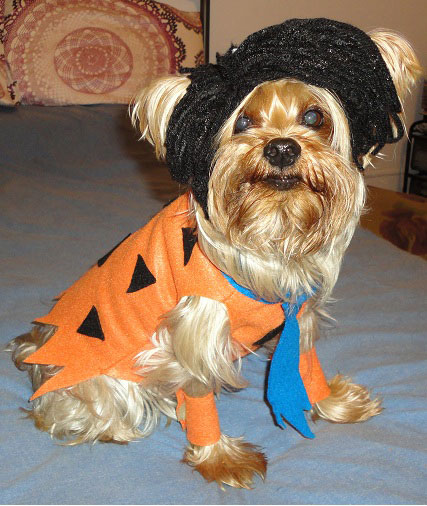 When it comes to pet costumes, whether for a party or simply scaring the neighborhood, look to the signs of the season for inspiration. Pumpkins, witches, ghosts, Dracula and Frankenstein are instantly recognizable.  Halloween costumes for dog will ensure a frightfully enchanted evening.

Shop for the perfect costume for your dog or cat at HalloweenCostumes.com! 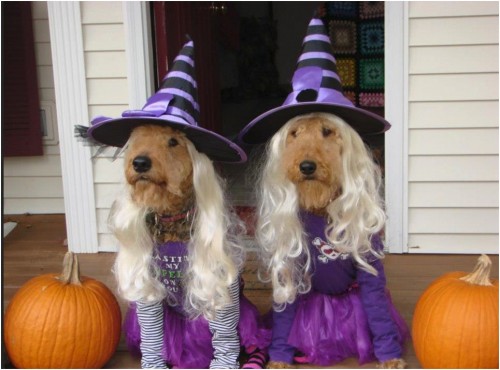 Photo courtesy of Fidose Of Reality

Halloween festivities just would not be the same without wicked humor.  Your pet is sure to get a second look and a chuckle with bad to the bone Halloween costume for dogs.  No magic is required for a spell binding experience.

Don't scare me, I poop easily! 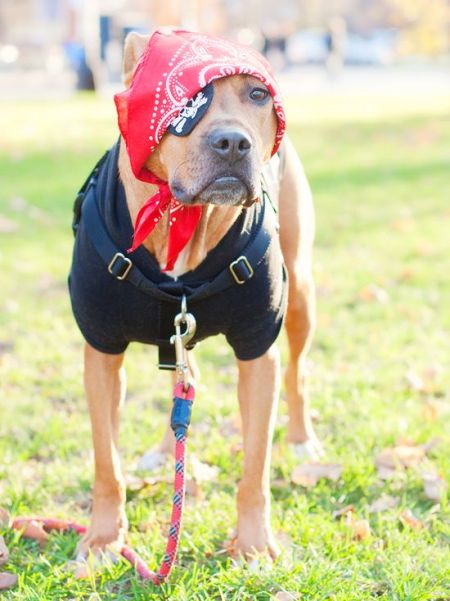 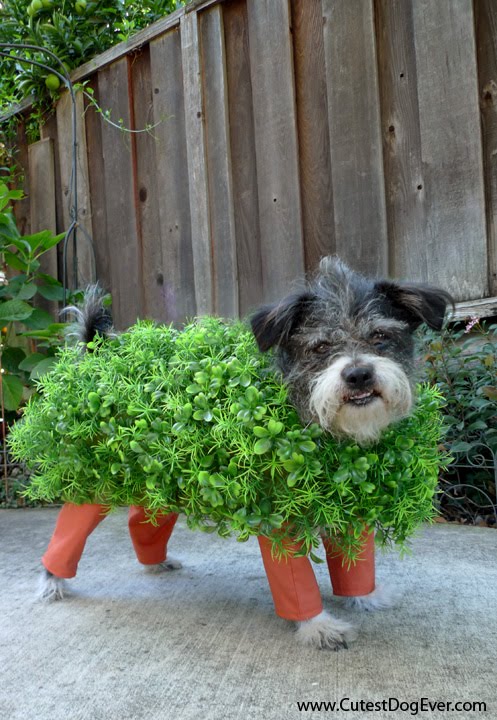 Photo courtesy of The Flirty Guide 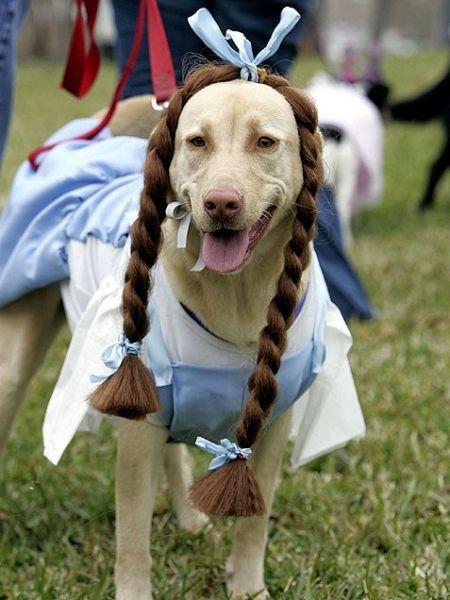 Photo courtesy of I Village 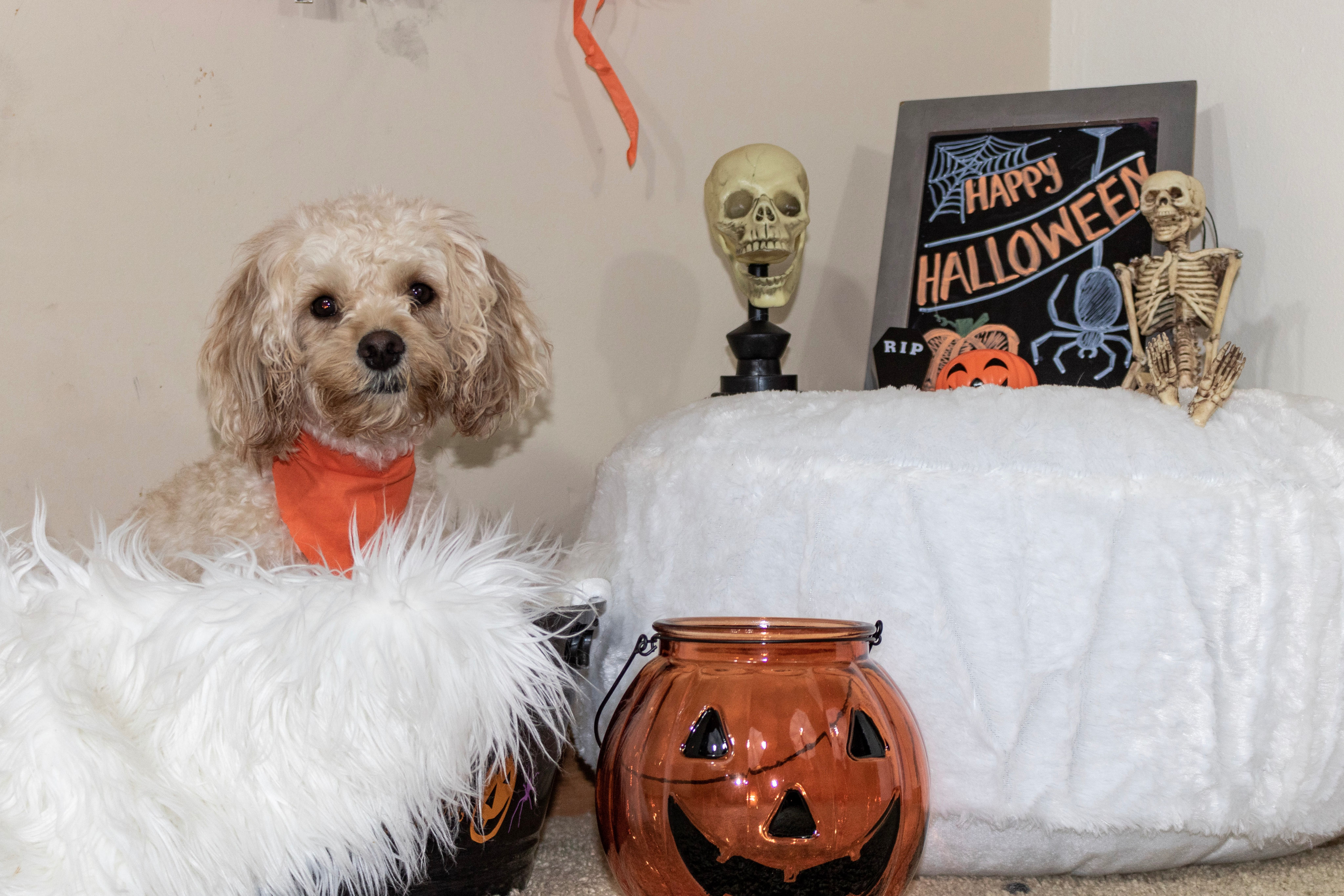 What Size Halloween Costume For Dogs?


One of the primary functions of a dog's tail is to communicate their emotional state, which can be important in getting along with others.

Consequently, it has been estimated that dogs, in general, have an olfactory sense ranging from one hundred thousand to one million times more sensitive than a human's.

A dog can identify a sound's location much faster than a human can, as well as hear sounds at four times the distance.

Dogs are less sensitive to differences in grey shades than humans and also can detect brightness at about half the accuracy of humans.

A growing body of research indicates the companionship of a dog can enhance human physical health and psychological well being.

The present lineage of dogs was domesticated from gray wolves about 15,000 years ago.

Dogs are highly susceptible to theobromine poisoning, typically from ingestion of chocolate.

The typical lifespan of dogs varies widely among breeds, but for most the median longevity, the age at which half the dogs in a population have died and half are still alive, ranges from 10 to 13 years.

The average sleep time of a dog is said to be 10.1 hours per day.

The increase in spending for Halloween costume for dogs is quite simply because there are more pet owners than ever before.  According to the statistics published by the American Pet Products Manufacturers Association in the National Pet Owner Survey in 2009–2010, it is estimated there are 77.5 million dog owners in the United States.  The same survey shows nearly 40% of American households own at least one dog, of which 67% own just one dog, 25% two dogs and nearly 9% more than two dogs.


Approximately 14.7 percent of people will dress up their pet with a Halloween costume for dogs. 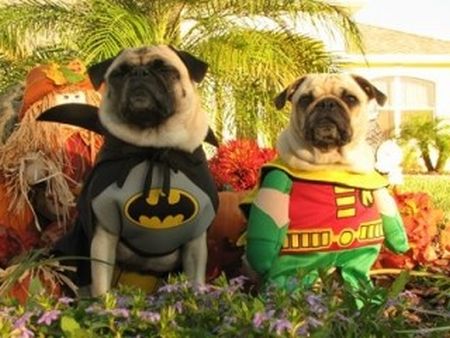