Halloween kids games will entertain little ghosts and goblins and make you giggle right along with them. Only for Halloween could you plan hair-raising games and activities to keep the party atmosphere exciting and let the spirit of the season shine through.  Any familiar childrens game can be terror-ized to capture the magic of Halloween with a spooktacular presentation.  Halloween is time for fun, so let the games begin.


From guessing the "body parts" to a hunt that ends in a treasure chest brimming with booty, there is one consistent element--spirit filled. Spooked out Halloween games for kids go a long way in enhancing the mystery of the night. 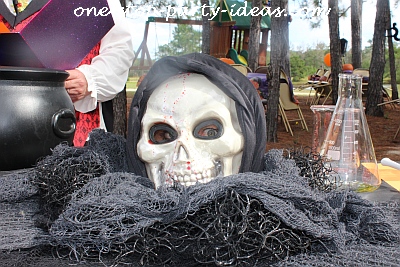 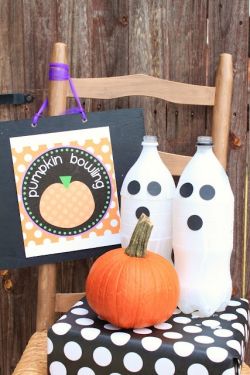 Share your enthusiasm for the season with tricked out Halloween kids games.

Once upon a Halloween night, living in this spooky town, was a man who died of fright bearing the name of Brown.  Many and many a year has passed since they buried Brown away, but his withering corpse we've here amassed dug up from his tomb today!

Here is his brain, which feels no pain.  (cauliflower)
Here are his eyes, frozen in surprise.  (frozen grapes)
Here is his heart, nevermore to start!  (jello jigglers)
Here is his hair, once so fair!  (yarn)
A few drops of blood, the rest turned to mud!  (ketchup)
One hand all alone, rotting flesh and bone.  (plastic glove filled with water and frozen solid)
Now touch his ear, which does not hear! (ear shaped from Play-Doh & allowed to harden)
And here is his nose, cold in his repose. (nose shaped from Play-Doh & allowed to harden)
All that's left of his skin are these worms within!  (spaghetti noodles)
Poor Brown is dead and withered away, can you guess what we really felt today?

Here's what we did.
We made the coffin from foam boards, painted it black, and bewitched to the hilt with a spray of flowers and a creepy hand.  On the back side of the coffin was an opening for the "body parts" to be placed, keeping them mysteriously hidden from sight.  Giving Halloween kids games a proper haunting makes them memorable--it was the hit of our party. 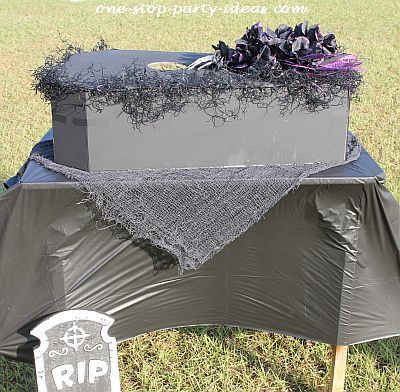 Step right up and test your skill.   Players throw plates of mashed potatoes at the head of Mr. Bones.  Simple enough for young players but enjoyed by all.

Pumpkin Bowling.
Decorate ten 2-liter plastic bottles.  Fill these bottles with just enough sand to keep them from toppling over too easily.  Roll a small pumpkin into bottles. 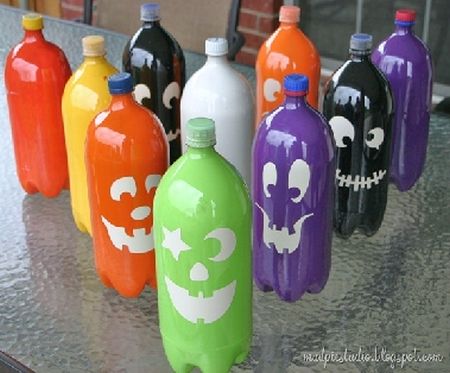 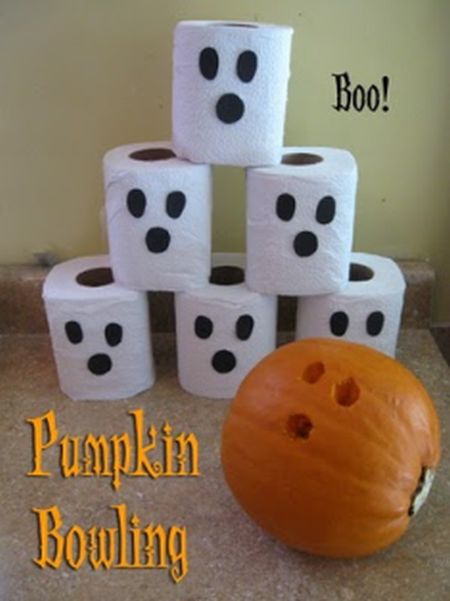 Orange and black plastic tablecloths are laid out to form our game board.  Numbers are placed on each square.  A pail is prepared containing corresponding numbers.  Children march around the giant board as music plays.  When the music stops, children stop on a square.  A number is drawn and the child standing on that number wins. 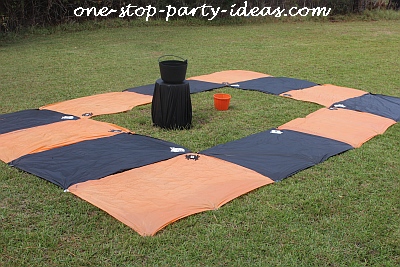 Pass The Ghost.
Ring Around The Rosie is the basis for this Halloween kids game. Have children form a circle.  Start the music and allow the children to pass around a ghost until the music stops.  When the music stops, the child with the ghost is out.  The winner is the last child standing. 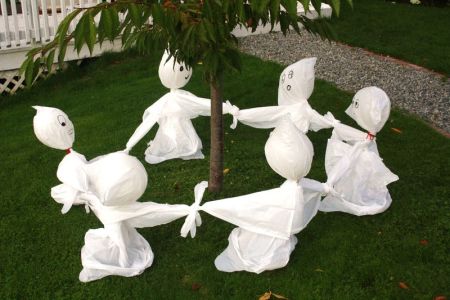 This ghostly decoration will become one neighbors look forward to seeing year after year.  Thanks to A Life Inspired for providing step-by-step instructions.

Halloween Cornhole.
Cornhole has become one of the most popular lawn games.

Knocking Down Pumpkins.
Some Halloween kids games are more age specific than others, but this game idea works for all ages. Simply paint or color the inside of bottles and let the kids have fun throwing a ball for the big knock down. 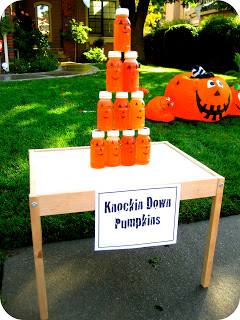 Apple Bobbing.
Traditional apple bobbing is a good way to pass fond memories along.  Fill wash tub with water and add apples. The child must retrieve the apple with his mouth only.  For older children, no hands allowed or blindfolds may be used. 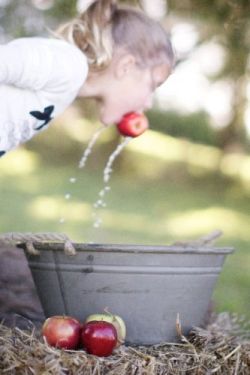 A new twist to old favorite Halloween kids games keeps participants dry as they bob.  Tie apples to a tree branch leaving the apple at an appropriate height for the age of children. 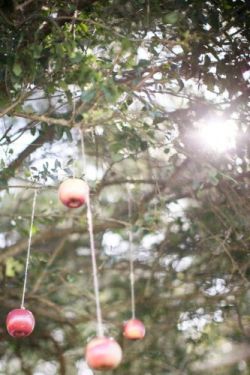 Photos courtesy of Scout And Charm

Doughnut On A String Game.
Eat the hanging doughnuts without touching it.  First one to finish is the winner.  For smaller children, use mini-doughnuts. 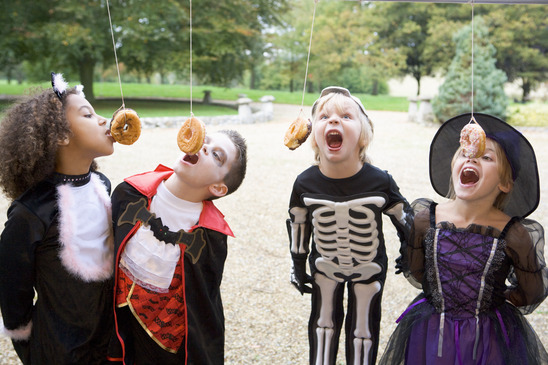 Pumpkin Ring Toss.
You will need pumpkins with long stems and small rings to toss.  Allow each player three attempts to ring the pumpkin stem.  The player who rings the most wins. 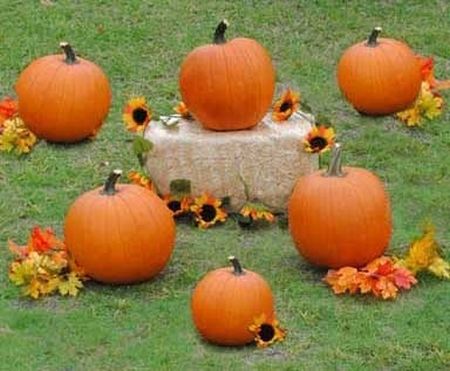 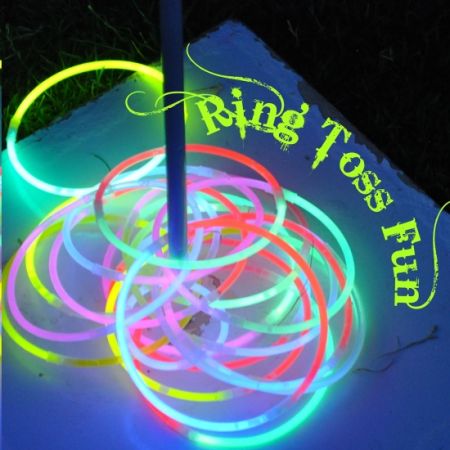 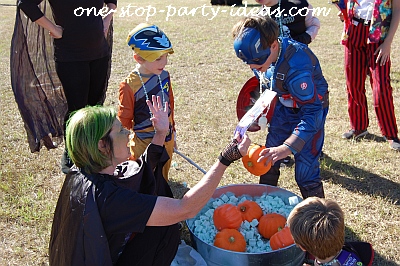 Witch Pitch.
Kids Halloween games that allow children to throw candy are always a big hit.  The one with the most candy corn in a cauldron wins. 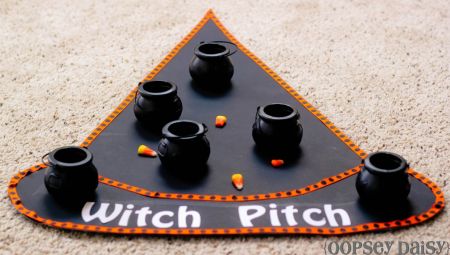 Candy Corn Pitch.
This is a spooky take on a candy tossing game.  Allow each player to toss candy corn into each bucket awarding points according to difficulty.  We awarded Silly String as a prize, making the end as much fun as the beginning. 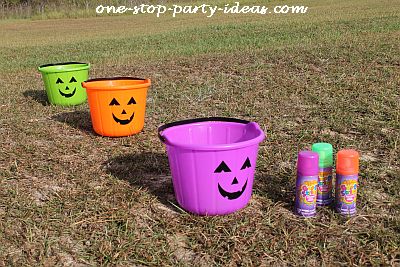 Treasure Hunt.
Hunting for treasure is an exhilarating activity for kids.  We turned our treasure hunt into a team relay with clues attached to foam shaped pumpkins.  The final clue led to this treasure chest brimming with goodies as a tantalizing reward. 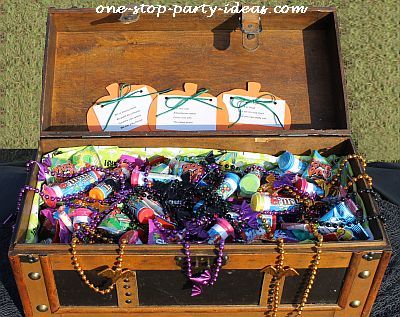 Scavenger Hunt.
Divide your guests into teams equipped with their lists and return time. The team returning with the most correct items is the winner. 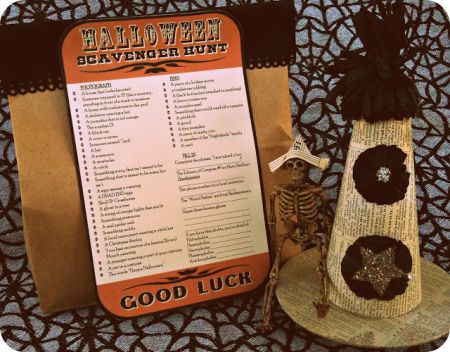 Nothing provides more opportunity for spooking kids than a haunted hayride.  Guests in full character, a few hay bales, and a somewhat twisted imagination was all it took to run chills down the spines of our favorite trick-or-treaters.  Here are some of the numerous terrors that we encountered on our haunted hayride. . .

Spirited greeting.
Ghosts were hung from tree branches all along the way.  We created these ghoulish handmade greetings from plastic tablecloths and applied a variety of facial expressions cut from black duct tape. 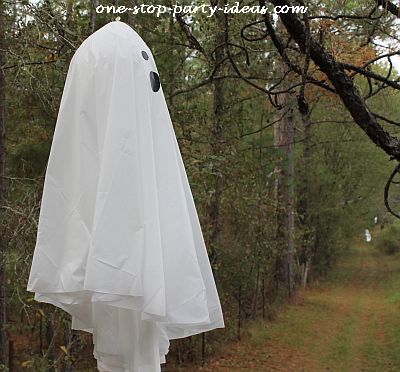 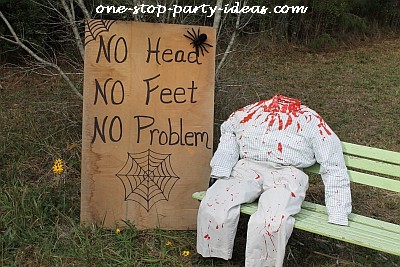 Scene of the crime. 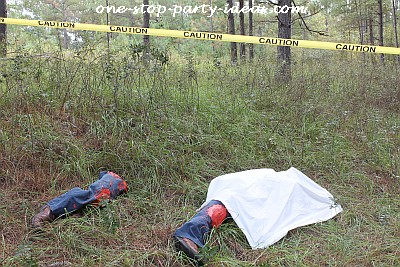 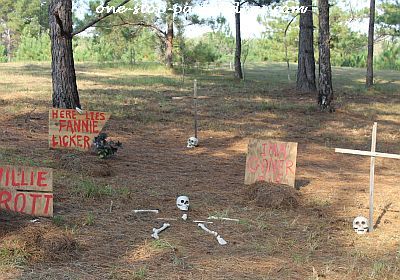 Scared to death.
Towards the end of the hayride, guests visited a graveyard.  A witch storyteller enthusiastically described the dearly departed and the cause of death. 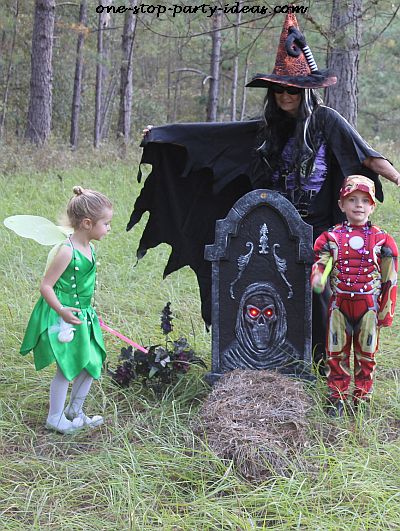 Bouncing Jack-O-Lanterns
Draw jack-o-lantern faces onto orange ping pong balls. Hollow out five to six pumpkins or use plastic pumpkins and place in a row. Each child is given a ball and tries to bounce their ball into the pumpkin. For smaller chidren decorate large baskets or plastic buckets with jack-o-lantern faces.

Creepy Crawler Diving
Fill decorative Halloween bowls with whipped cream and add gummy worms. Place the same number of worms in each bowl allowing the worms to appear to be crawling out of the whipped cream. Give each child a bowl of worms and at the sound of go, the first child to retrieve all the worms wins.

Pumpkin Decorating
Have markers, stickers, yarn, pipe cleaners, construction paper, scissors and glue available for the children. Award a prize for the best pumpkin or award them all for their participation.

Face Painting Station
Have someone available to paint the children’s faces or maybe apply tattoos. If you can’t think of anyone, try kid friendly tattoos instead. The Halloween tattoos are easy to apply and the kids love them.

Carnival Theme
Set up stations that offer a variety of activities or games. This idea works particularly well for large groups. Review the Halloween kids games shown here as many would fit perfectly into a carnival themed party.

As the Halloween kids games begin, play spooky music in the background to set the scene.  Eerie and scary Halloween party songs will capture all the mystery and magic of Halloween. 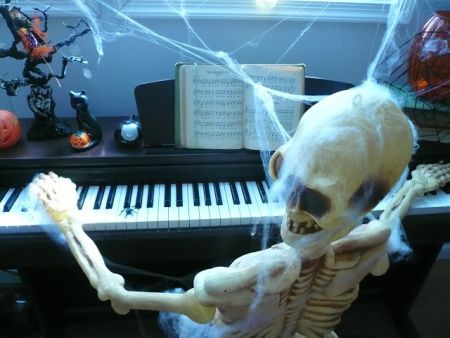 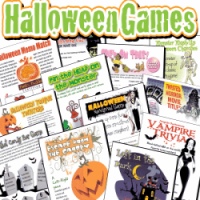